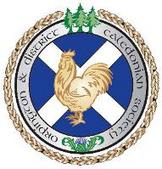 We have always celebrated Burns’ Night, St Andrew’s Night and Hogmanay. Originally St Andrew’s was a very formal Dinner and Dance attended by over a hundred and fifty people and with several speakers as well as (of course) dancing. Nowadays Burns’ Night is our more formal occasion but not on the scale of the St Andrew’s of old! Not until the 1960s did Scottish Dancing predominate on the evening programmes; old-time, ceilidh and ballroom dancing was also popular. For the first few years Halloween was an evening family occasion but in the 1960s this changed to a Children’s afternoon party which continued until 1989.

From its inception our Society has supported charities; the Royal Caledonian Schools were supported from early in the 1950s and still today we give annually from our Benevolent Fund to (usually) one Scottish and one local charity. Our Society sends teams to dance at Old People’s Homes, Burns’ Suppers, Church Fetes, Social Clubs and Dance Festivals to name but a few and any money that is donated goes to the Benevolent Fund.

Our Society is affiliated to the Royal Scottish Country Dance Society and has been a member of the Kent Association of Scottish Societies since 1952. Several Orpington members have been Chairs of KASS. Our Society’s distinctive crest featuring a Buff Orpington Hen, surmounted on a St Andrew’s cross, was designed in the 1950s and is part of the President’s Chain. It represents the Society’s original aims of keeping alive Scottish traditions in Orpington – something we still aspire to do.

Our Society was formed in May 1937 with the aim of bringing together Scottish people living in Orpington so as to keep alive the traditions of their homeland. There were 125 full members (who had to be Scottish by parentage, birth or marriage) but you could be an associate member if you did not fulfil any of these requirements. Today there is no such distinction! The Society went into abeyance in 1940 until 1950 when activities started again.

The 1950s and 60s were decades when the piping and highland dance skills of members were very evident. Members competed successfully at Festivals (particularly the “Festival of Scotland”) and took part in many demonstrations at the formal functions of our Society and others. The Caledonian Singers were formed in the 1950s and was much in demand right through to the 1970s.

Like today classes to learn Scottish Dancing (“Reels Classes”) were popular from the start. Over the years Children’s Classes were also popular (they started after the war in 1959) and they continued in a variety of forms throughout the 1960s and beyond. The Children’s teams were outstandingly successful and won many medals at Festivals. An afternoon class which started in the early 1970s is still going strong today (although it has dropped the “class”!) In 1989 a “Beginners and Improvers” Class began and continues to this day, led by one of the founder teachers. The members of the Demonstration teams of earlier years were the product of the Reels Classes and their successors, and our Society still offers technique classes today for those who are keen to improve.

In the pre-war and immediate post-war years Scottish dancing was not the only leisure activity offered by the Society. There was a drama section, a group who played tennis regularly on the private court of one of the founder members, quiz nights and film nights were organised (the former only ceasing in the 1990s) and there were outings to places of interest and rambles. The outings continued, on and off, until the early 2000s. Ceilidhs appeared on the programme regularly and the Society still organises one each year at which members entertain each other with sketches, musical items, dance demonstrations and amusing recitations.